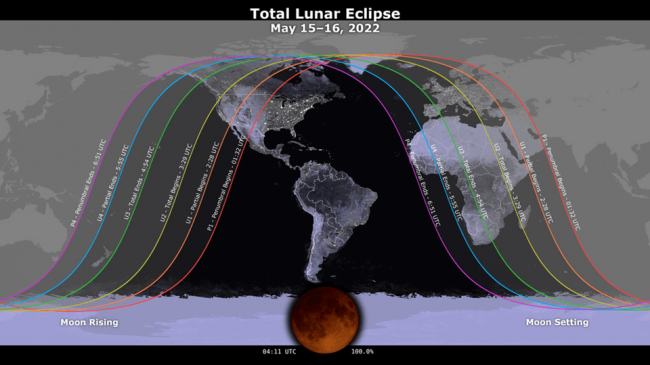 The Scorpio Full Moon tomorrow on May 16 at 2.14 pm will be a Total Lunar Eclipse Blood Moon, fully visible in the Americas but again we miss out from our position round the globe. The Moon will be at 25 degrees and 17 minutes, the 26th degree of Scorpio, and the Sun of course opposite in Taurus.

This eclipse as Saros Series 6 North has been designated to focus on our relationship to authority, father figures and the need to take responsibility and control, accepting the commitments that present themselves, possibly to do with the illness or unreliability of others! Whereas, Solar Eclipses tend to influence events in the community, Lunar Eclipses tend to have more effect on our inner consciousness and unexpected realizations about our motivations.

The Sabian Symbol for the Moon is ”American Indians making camp after moving into a new territory”, the ability to adjust swiftly to a new situation, by tuning into its requirements, efficient functioning. Luna will be less than 3 degrees from the South Node, whilst Uranus moves ever closer to the North Node.

For the Sun in the 26th degrees of Taurus, there is the Sabian Symbol “A Spanish gallant serenades his beloved”, the ritualization of individual desires to find fulfillment, or role-playing. The Sun will be sandwiched between applying to powerful asteroid Goddess archetypes in Sedna and Hekate, just ahead having separated from Eros and Sekhmet, the lion-headed Egyptian warrior goddess of strength and healing.

It will be hard to make the right choices with so much feminine energy in play. Hekate can help in choosing the right path ahead, but Sedna was notorious for making bad choices. A few days later on May 21 when the Sun ingresses into Gemini at 11.23 am, he will have left slower moving Sedna behind in Taurus, but Hekate will have preceded him into Gemini, so it will be a more productive time to make decisions about which way to move forward.