“I wish I knew how to decipher all the symbols on my cards” is a common lament amongst tarot devotees!

Prior knowledge of Tarot is not required to understand this workshop and gain valuainformation around your journey through life using the symbolism.  My ten week Tarot Course canpr ovide you with the ability to work fully with the cards.  Those already working with the Tarot will find it adds further layers of depth to your understanding of the card meanings.  If you like a kind of Advanced Tarot or Tarot 101!

The Golden Dawn came up with many structured systems associating both the Tarot cards and the Tree of Life with Astrology through the Elements, Zodiac signs and Planets.  These will be explained including the meanings and system of the Hebrew alphabet, and the Cube of Space.

Come and have a fun day finding your personal   Major Arcana cards within the Tarot and understanding how they resonate with your life journey!  Pick up some new ideas and take away some different tarot spreads, which will enable you to use your cards to obtain a different kind of information about your life; somewhat in the spirit of Rachel Pollack’s “Wisdom Readings” talked about in her book “Tarot Wisdom”!

Kabbalah (Qabalah, Cabbala) literally translated, means to receive from mouth to ear.  It is the Hebrew mystical system, not a religion, as such it particularly supports all kinds of spiritual beliefs.   The Tree of Life is its primary symbol and in itself is a model for creation, self-development and enlightenment.  There are 10 centres of energy, emanations called Sephirot on the tree which can be linked to the numbered suits of cards in the Tarot.  These Sephirot are joined by vibrational paths which have associations with the 22 Major Arcana Tarot cards and the 22 letters of the Hebrew alphabet  The Hermatic Order of the Golden Dawn, formed in the late 1880’s, was responsible for collating, focusing and expanding on existing Western esoteric traditions to formalise the system.  This included structured  linkages between the Tree of Life, the Tarot, the Hebrew letters, the human body and astrology.   Many Tarot Decks contain symbols representing the astrology and/or letters associated with the cards.   However some artists or designers of decks have sometimes taken it on themselves to “redesign” the paths, so care should be taken until they have been validated. 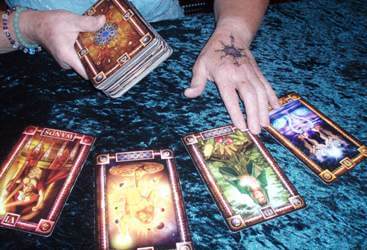 “The master-key to the Hebrew wisdom is the name translated as Lord and Jehovah in the Bible.  It is not really a name at all, but rather a verbal, numerical and geometrical formula, spelled IHVH.  Correctly translated it means “That which was, That which is, That which shall be” “

– The Tarot: A Key to the Wisdom of the Ages