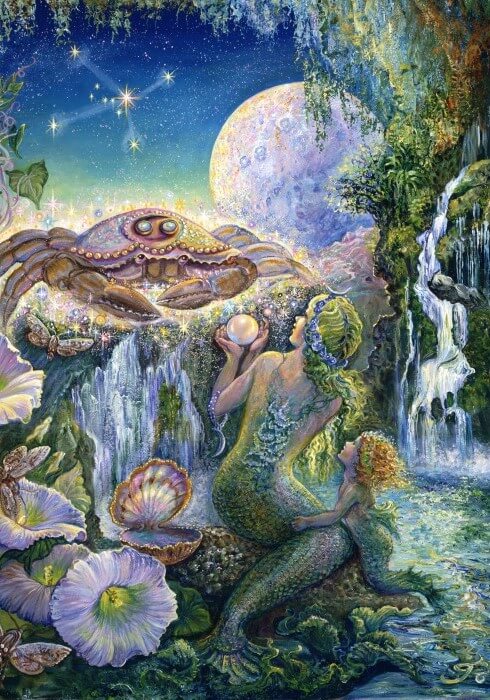 The Cancer Full Moon 2022 tomorrow January 18 at 10.48 am will be at 27 degrees and 50 minutes of the sign. The “Old”, or “Cold” Full Moon, will be at 27 degrees and 51 minutes of Cancer, the 28th degree of the sign. The Sabian Symbol is “An Indian girl introduces her white lover to her assembled tribe”. Inner rebirth through a total acceptance of the primordial values manifested in the human body and its natural functions – a return to nature!

The symbol for the Sun in the 28th degree of Capricorn is “A large aviary”, the enjoyment of spiritual values by the soul able to familiarize itself with their implications, clairaudience, becoming aware of a variety of inner voices.

The Moon will be opposing Pluto, who will be conjunct the Sun, something no longer of value will need to be eradicated at this time, maybe a relation or work role that is not in line with future growth opportunity.

The Moon and Sun will form a Grand Square to asteroids, Achilles and Horus in Aries, (also conjunct Eris the Goddess of Discord), opposite Flora , the Goddess of Fruition and Ripening. You may have both the courage and inspiration to use vengeance as part of this release, but it would be best to avoid temptation, even though emotions are strong when the Moon is positioned in Cancer, the sign she rules! The Nodes at zero degrees and 6 minutes of Gemini and Sagittarius, will form an OOS T Square with asteroids Eros and Artemis from the last degree of Aquarius. Eros being the primordial life force energy which came into being alongside Mother Earth and Artemis the Greek version of the virginal Crescent Moon, forces of nature at odds with their energies. Interestingly Uranus, the modern ruler of Aquarius will be stationary for his change to Direct energy, exact at 10.12 pm, some 12 hours later

Sol and Luna will be forming a Mystical Rectangle with the Nodal Axis at the time of the lunation, working together to prepare for their change of sign at 5.50 am the next day. The Full Moons will be falling in the late degrees of the signs they rotate through, for this uneven calendar of the first few months of the year (with February and April only having 28 and 30 days), so keeping closer in line to the Moon’s natural monthly cycle of 29.5 days! The change to the signs of the nodal axis as it moves backwards through the Zodiac will put them in the last degrees of Taurus and Scorpio, so making close aspects to the luminaries who move forward one sign each month for their connections and Pluto in the 29th degree of Capricorn!

Likewise the New Moons will remain within 12 to 10 degrees of the signs they are rotating through each month over this period.