The Tree of Life is the major symbol of the Hebrew mystical or esoteric system and represents the process of creation, moving down through different emanations of energy, from Sephira One, Kether (or being a soul with God), to Sephira Ten Malkuth (or being manifested in the material world).

The Bible states that God created the world from numbers and letters. The Sephiroth are the 10 numbers and the 22 Paths that connect them are the letters, as each is linked with one of the 22 letters of the Hebrew Alphabet. The Sephiroth align with the numbered suits within the tarot Minor Arcana. In addition the Kings of each suit are associated with Sephira Two, Chockmah, the Great Father and beginning of the Masculine Pillar of Mercy. The Queens are associated with Sephira Three, Binah the Great Mother and beginning of the Feminine Pillar of Severity. The Knights are likewise linked to Sephira Six, the Son, Tiphareth, the central point of the Trees and the Pages to Sephira Ten, Malkuth, both on the central Pillar of Equilibrium.

The series of eleven workshops on the Mystical Kabbalah are held monthly, for two hours over a total period of ten months. It is immediately obvious that the construction of the Tree of Life is an intricate arrangement of Sacred Geometry, which will be explored in the first workshop. The following ten workshops will focus on each of the 10 Sephira in turn, starting with Kether and moving downwards. The meaning of the Sephira will be explored in conjunction with it’s multiple symbolism, including a range of associated images, mundane and personal chakras, Arch-Angels, titles, colours, texts, virtues, vices and body parts. The linkages to the tarot cards will also be discussed in detail. 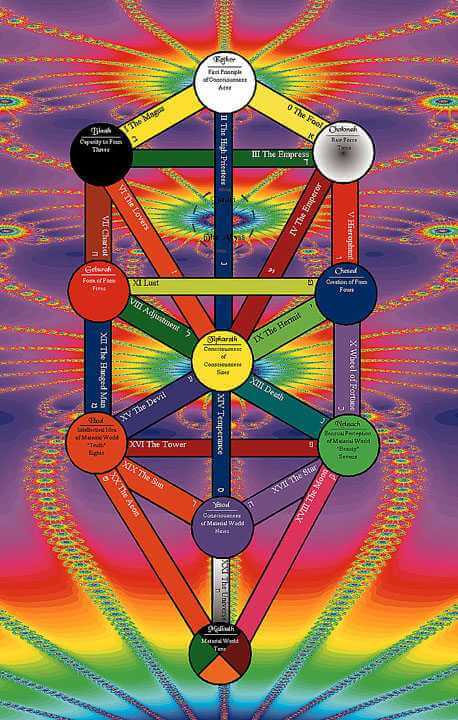 “A symbol is of value in that it suggests something which cannot be adequately expressed in language (although language in itself is a form of symbolism). Most important, however, is while on our plane of existence symbols are abstractions, they are realities on other planes………There is a vast complex of symbols attached to the Sephiroth and Paths on the Tree of Life.”