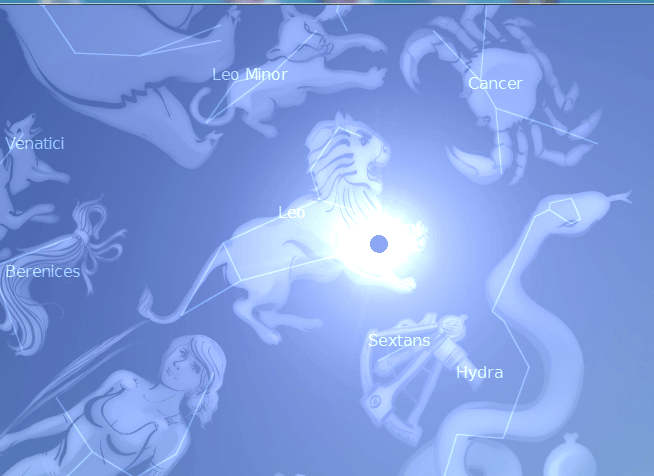 Total Solar Eclipse in Leo 2017 is exact tomorrow morning 22 August at 4.30 am (AEST) and receiving a lot of attention, as it will be the first Total Solar Eclipse visible across continental USA in 99 years and significant world events traditionally tend to erupt along the path of an eclipse.

It is also a rare second Leo New Moon at 28 degrees and 53 minutes of the sign.  The spotlight has been fair and square on the Leo-Aquarius axis in the zodiac ever since the Lunar Nodes changed into these signs on May 10 this year and the prior Penumbral Lunar Eclipse/Full Moon in Leo in the signs on February 11!    The Full Moon in Aquarius on August 8 was a slightly stronger Partial Lunar Eclipse and now, following the conjunction of the Sun with the North Node last week on August 17, we have a Total Solar Eclipse!

The polarity of Leo-Aquarius brought into play by the change of sign of the Lunar Nodes in May will impact the sign of eclipses through to the end of 2018.  So the emphasis on shining your light through personal creativity and self-expression, versus what is considered good for the group, tribe, community, culture and how others in the community at large approve of/or accept you, remain in play for another 18 months.

The power of Leo is being emphasized even further by the closeness to the Fixed Star Regulus to this Total Solar Eclipse.  The alpha star of the constellation of Leo, it is called the “Heart of the Lion” and one of the four most significant Fixed Stars, the “Royal Stars of Persia”. It is currently positioned just inside Virgo, at 00 degrees and 3 minutes, after finally changing sign from Leo on November 28 2011.  (The Fixed Stars move only one degree in 72 years, hence their name!).  Regulus brings power, leadership and greatness providing it is used generously for the greater good!  It is a challenging energy as it will turn savagely against anyone who uses it arrogantly, unkindly or for revenge!

The Sabian Symbol for the 29th degree of Leo is “A mermaid emerges from the ocean waves ready for rebirth in human form”.  This speaks of a yearning for conscious form and solidity, a stage at which intense feeling intuition from the unconscious is about to become conscious thought.

Do you have the courage to be who you are without being pulled down by so much collective suffering in the world that surrounds you?  Can you shine and light the way forward without descending into feeling powerless or descending into the shadow of Leo in tyranny, pride, arrogance, childishness and self-importance.

Solar eclipses in ancient times were often associated with the death of kings and the fall of leaders, a death resulting from too much ego.  This eclipse is powerfully charged by Mars and the North Node conjunct the luminaries forming a wide Grand Trine or Fire Triangle in the sky with Uranus and Eris in Aries and Saturn in Sagittarius.  There is potential for recklessness, overconfidence and accidents so take care. 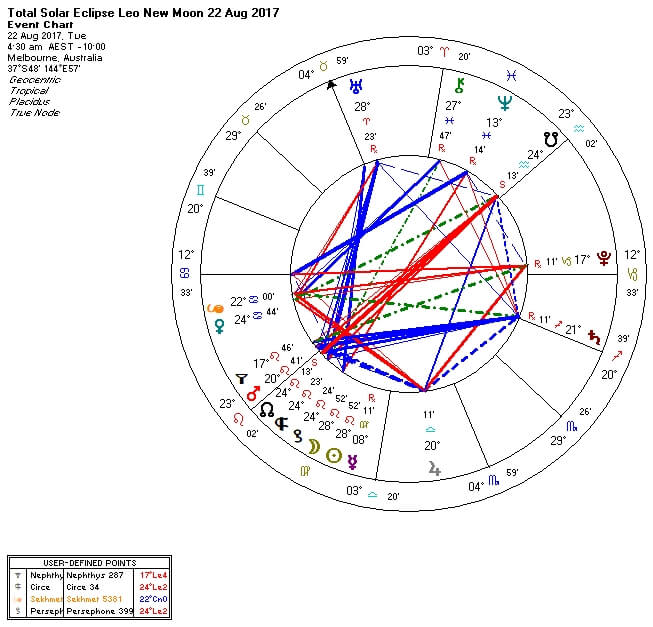 Strong feminine energies are being added from the asteroid belt!  The Moon has recently been merging energy with Nephthys Queen of the Night and midwife to those in the realms between life and death.   Circe and Persephone are neatly sandwiched between the North Node and the Sun, reminding us of the shape shifting or transformation we are needed into make at this time, by descending into the underworld of our psyche.  At a Solar Eclipse the Moon blocks out our ego along with the Sun and we are able to see ourselves as we really are.  This brings the potential for deeper than usual insights into who we are and what we have the potential to grow into.

Be mindful that this is also the second of two New Moons in Leo during 2017!  A much more significant event than the so called “Blue Moon” when there are two Full or New Moons in a calendar month.  The Gregorian calendar month was after all a construct of the Catholic Church in 1582, not a cosmic cycle of nature.  These two Leo New Moons are made more powerful by the Aquarius Full Moon and Leo New Moon in August both being Eclipses, so having an energy which lasts beyond the monthly Lunar cycle into the months until the next eclipse season in January/February 2018.  The area of your life that will be most impacted by each of the two Leo New Moons will also quite possibly be different depending on where the sign of Leo falls in your horoscope chart.  They fell at  just 0 degrees and 44 minutes in July and now at 28 degrees and 52 minutes in August!  More than likely this will begin in one house and end in the next one.

With the Sun and Moon in the sign of Leo, the energy focus will be on:

So the energy you will be dealing with will remain as I have described above, but it is likely to present itself in a different but consecutive area of your life from last month.  So the changes you are able to effect through your affirmations and direction that you set can remain in alignment for a longer period of time and impact a more extensive portion of your lifestyle and personal character.  The area most aligned with the position of these two New Moons can thus be much better gleaned from your natal horoscope chart, however if you only know your Sun Sign, then affirmations around the areas indicated on the next page are likely to be the most powerful, but some adjustment may be required to the life areas:

I remember watching the Total Solar Eclipse over Northern Australia in 2012 live on television as it happened and how amazed I was at the depth of feeling I encountered.  I encourage you to watch this Total Solar Eclipse live, if you are able to, over the internet or in person of course if in the US,  its an experience not to be missed!

The symbol of the proud and powerful lioness in Sekhmet, from the Egyptian cosmology sets proudly with Venus emphasizing all that we  love in the beauty of the lion as a symbol of Leo and stamping her authority over the event! 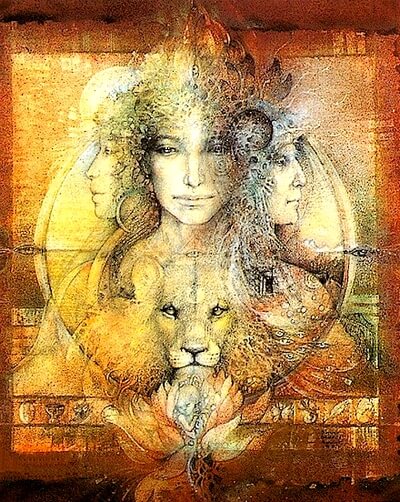