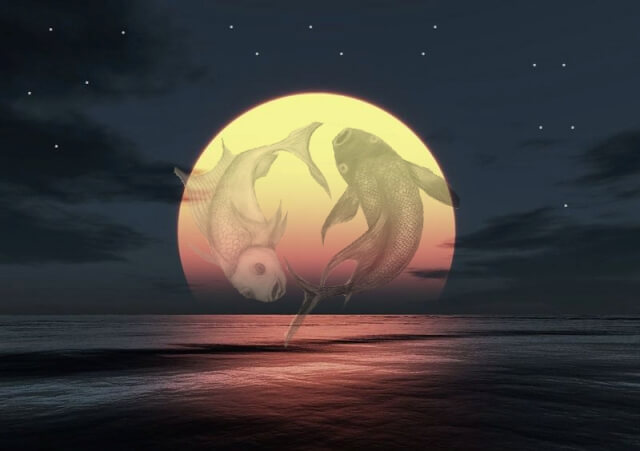 Pisces Full Moon 2017 will fall tomorrow 6 September, at 5.02 pm (AEST), at 13 degrees and 53 minutes of Pisces, so with the Sabian Symbol for the 14th degrees of Pisces, “A lady wrapped in a large stole of fox fur”. This signifies protective intelligence, using intelligence and mental subtlety as protection against trials and storms. The fox, being clever, subtle and cunning, has an adaptive intelligence that hides his central will.

The Pisces Moon activates her modern ruler Neptune, retrograde at the time, through a close conjunction. The Sun and Moon applied energy to Neptune at the Solar Eclipse/Pisces New Moon in February, generating seed dreams and visions about deeper mergers and enmeshment on both the spiritual and the physical planes, ways to heal shadow emotions of separation, powerlessness and victimisation. Neptune’s current retrograde cycle offers the ability to integrate this fully into your unconscious.

At the same time Venus in Leo will be making an awkward quincunx aspect, (which is almost exact), to the midpoint of the Moon and Neptune. You are being asked to adjust what you are attached to, in your relationships, as an outcome. Neptune’s traditional ruler, Jupiter, in Libra, the sign ruled by Venus, forms a tight opposition to Eris, Goddess of strife and discord.  So you may not like the responses that get mirrored back to you by partners.  Jupiter has also returned to the position from which he retrograded in February, so it’s like the reset button has been activated in more ways than one.

For the Sun, in the 14th degrees of Virgo, the Sabian Symbol is “An aristocratic family tree”. This indicates root power, a reliance on ancestral antecedents and traditional characteristics to produce true spontaneity and creativity to meet collective needs.

Mars will have just changed sign to Virgo and will be in the same degree and closely conjunct to the Fixed Star Regulus, also conjunct and sharing energy with the ruler of Virgo, Mercury, who will have had his power amplified, by having just become stationary as he changes to forward motion! This will enable you to access deeper truths, guiding the creative action you need to take to heal and bring service to others, as a result of what was shown to you by the recent Solar Eclipse, which was in the same degree and sign as Mercury will be at the Full Moon.

An Earth Grand Trine will be formed between the Sun, Pluto and the asteroid Pallas Athena, providing much needed grounding and support to achieving practical outcomes.