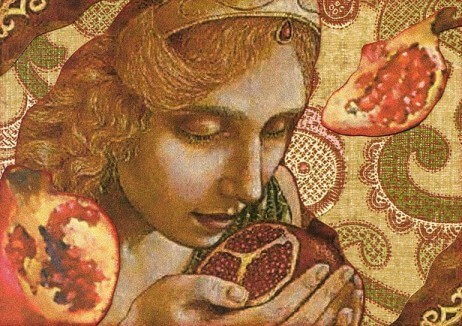 The Moon changes sign to Cancer, and joins Persephone underground later this evening from 8 pm and 11.30 pm (AEST). It’s like they have a dinner date together, I wonder if pomegranate will be on the menu?

The Moon left Gemini at 2.30 am and moved into a segment of the Zodiac almost free of planets and asteroids, her own sign of Cancer. She can be true to her own energy here with no interruptions. She is the Great Mother and the energy focuses around love, home and family, the things that make us feel safe, nurtured and supported. At the point where Gemini meets Cancer we encounter the most private and sacred point in the Great Round. It is our emotional central point, what enables us to feel secure and grounded from within.

Persephone is an interesting archetype from Greek mythology the transition of the maiden Kore into “the Destroyer”, Hades’ Queen of the Underworld and extremely powerful maturation. Her mother Demeter, Mother Earth, wanted her to remain “her beautiful daughter”, content to have her wander the meadows picking flowers, remaining like the chaste Crescent stage of the Moon forever. No man would ever be good enough to take her away. So Hades, Dark Lord of the Underworld, had to drive up in his invisible chariot and whisk her away to his kingdom deep below the ground, when he fell in love with her and wanted her to be his wife. It is called the “Rape of Persephone” but was that what it was? And if so was it a bad thing? This is a natural part of the cycle that women need to go through, just like the cycle of the Moon….

Persephone seemed to develop abilities from deep down inside herself, she was a powerful Queen who ruled at Hades side in harmony with him, there was no conflict, or lack of commitment like that experienced between Zeus and Hera in the Heavens. She stepped into her mystical, intuitive and psychic side, developed deep down in her soul, so she was able to guide those who struggled in the depths of the Underworld. She had the wise Goddess of Transformation, Hekate there as a companion, the waning crone phase of the Moon, acting as a mentor.

Mother Earth pined away without her lovely daughter, so Mercury was sent down as Messenger of the Gods to broker a deal for Persephone to return to Demeter. However as she had eaten six pomegranate seeds, before this happened, she returned for only six months of the year, setting up the cycle of the seasons in addition to the cycle of the Moon. Thus connections with dwarf planet Ceres, (the Roman Name for Demeter), and the asteroid Persephone in the chart, can inform us about mother-daughter issues, eating disorders and problems women experience when stepping into their power. Persephone can also signal descents into our unconscious associated with soul work and discovering the depths of our psyche, sometimes even depression should we remain down there for too long. But she is also the archetype for all that is drawn to the mystical, psychic and intuitive realms of life, our ability to know the significance of what we and others are feeling and experiencing.