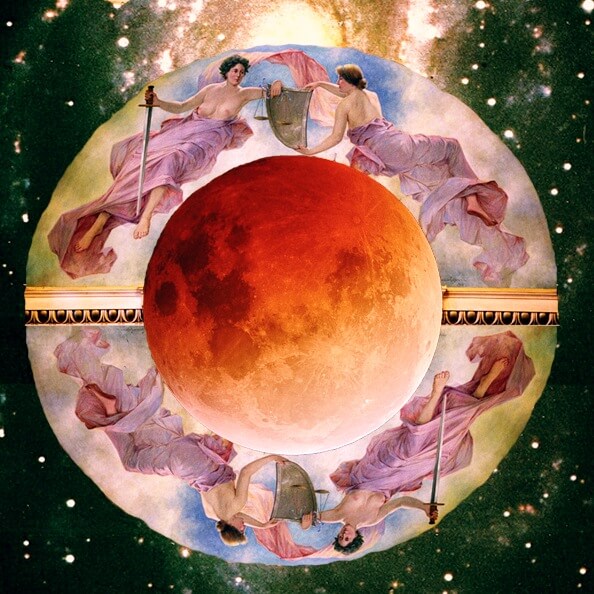 The Libra Pink Full Moon falling on 8 April, at 12.34 pm (AEST), will be this year’s closest “Super Moon”, so huge in your mind symbolically, if you are able to be outside to view her.  Around the time of April the moss pink, or wild ground phlox, is in blossom in the Northern Hemisphere. The name was used by the Algonquin tribe, as well as by colonial Americans. So Pink is a traditional name you may see used for the Libra Full Moon in various communications.

The Moon will be at 18 degrees and 43 minutes, the 19th degree of the sign and the Sun of course opposite in Aries. The Sabian Symbol for the Moon is “A gang of robbers in hiding”, describing protesters over unbalanced social privilege which requires transformation,or group protest.

For the Sun in the 19th degrees of Aries, there is the Sabian Symbol ”The magic carpet of oriental imagery”, this invokes the use of your creative imagination to transcend strife through detaching your outlook from focusing on everyday life and looking to the future.

Like all Libra Full Moons this lunation is themed around seeking a balance between self and the requirements and needs of others. We are all experiencing this at the moment through needing to stay home to protect humanity.

The Sun will be merging energy with Hephaestus the Smith God who built all the material artifacts needed in Olympus.  He had a torrid relationship with his mother Juno/Hera whose asteroid is opposite, merging energy with the Moon.  Juno bore him parthenogenetically, but threw him out of Olympus because he was ugly and lame!  So it would seem there is balancing to do with this Libra Full Moon between the masculine and the feminine.

The Sun and Moon form a T-Square to the Jupiter/Pluto/Pallas Athena combination which may help you to ride the storm and have hope for safe, common sense ground in the future.  Pallas’ sobering quality, using wisdom and creative intellect to fight for fairness over Pluto’s obsessive qualities and Jupiter’s amplification of the situation.