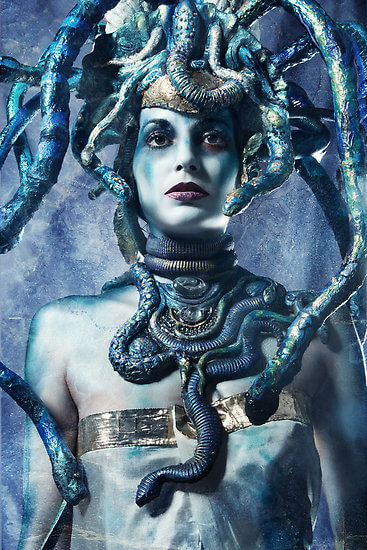 The Gemini New Moon with Medusa  will be on May 26, at 5.46 am in Melbourne (AEST), at 4 degrees and 47 minutes of Gemini, so in it’s 5th degree.  The Sabian symbol is “A revolutionary magazine asking for action”, it speaks of the explosive tendency of repressed feelings and root emotions, the desire to reach beyond established forms to make change.

The asteroid Medusa will be conjunct the Sun and Moon, with an orb of just 3 minutes at the time of their union, so almost perfected.  Medusa was turned into a monster with snakes for hair by Pallas Athena, so ugly that anyone who gazed at her face was turned to stone.  Her crime was being beautiful presumably, as a Gorgon priestess in Athena’s temple in Athens, she was raped on the altar by Poseidon God of the Oceans.  Athena hated Poseidon but rather than take him on she decided to vent her rage on the hapless Medusa.  Athena later helped the hero Perseus to lop off her head, without becoming a statue.

So there is an element of being squeaky clean and making sure you don’t lose your head about this lunation.

The Sun and Moon form a wide square to the Nodal Axis, so it has a karmic nature about it.  The asteroid Merlin will be conjunct the South Node and Prosperina, Queen of the Underworld, will merge energy with the North Node.  Venus forms a square aspect to her husband the Dark Lord of the Underworld in Pluto.  Magic which worked against you in the past, could be turned around providing you pay the right respect to what is bubbling up from the depths of your unconscious and act with caution.

Whatever you may be feeling it will be better not to react to the emotions that come bubbling up, just suck it up and keep your head on your shoulders until the enery calms down, practice love and forgiveness.

With the Sun and Moon in the sign of Gemini, the energy focus is on: