There will be a Gemini Full Moon this afternoon December 19, following the start of the final Draconic Bowl as Venus Stations Retrograde!

The Full Moon will be at 3.35 pm on 27 degrees and 28 minutes of Gemini, the 28th degree of the sign, which has the Sabian symbol “through bankruptcy society gives to an overburdened individual the opportunity to begin again”. This image expresses liberation from the past, or a release from unbearable pressures, feeing one for new tasks.

The Sun in the 28th degree of Sagittarius will have as his symbol “An old bridge over a beautiful stream is still in constant use.” This speaks of beautiful necessity, the enduring elements in a society, which reveal its ability to significantly link the genius of its individuals to the everyday needs of the collective. It would seem that new beginnings will be in order for many of us at this time. 2022 looks to be a very different kind of world into which we all need to forge a new path.

A number of astrological events are coming together over this time!

Mars ingressed  into Sagittarius on December 13 and Mercury, the ruler of the Gemini North Node moved into Capricorn on December 14, setting the scene for the third and last cycle of the Draconic Bowls, on December 16 at 7.12 am. The Nodal Axis will keep the planetary bodies trapped on one hemisphere, from Sagittarius through to Gemini until April 24 2022. Only the Moon will be obviously be exempt, from this restriction. Mars’ conjunction with the South Node in Sagittarius at 1 degree and 41 minutes of Sagittarius began this process.
This nodal entrapment occurred from February to May 2020 coinciding with the beginning of the current pandemic. It reoccurred from December 2020 to March 2021 with the second major lockdowns overseas and it would seem this is starting to happen again in Europe at the moment. Historical occurrences of the Draconic Bowl have corresponded to the start of other virus pandemics in smallpox and AIDS. Obviously in 2020 and 2021 there have been additional planetary cycles in contribution. I had an in depth article on this published in the Aries equinox edition of the OPA magazine earlier this year on page 69

The following is what was submitted  as predictions for this last cycle, but the article was considered too long sit was omitted!

Start of the 2022 Draconic Bowl December 15 2021
The South Node is within 2 degrees of the 8th House in Sagittarius, Jupiter is now squaring the Nodal Axis, but still weak. Possibly, the relaxation of certain restrictions could have proved too optimistic? Mars is exactly conjunct Ketu this time (also peregrine and weak). Mercury, the dispositor of the North Node in Gemini, is again ineffectual, peregrine in Capricorn, but making an exact quincunx to the North Node! An adjustment in materialistic mindsets could help! All the other planets are weak, direct and peregrine, except for Uranus who is retrograde and still squared by a much stronger Saturn.
Whilst Saturn is no longer aspecting the Nodal Axis, it still seems that real transformative change is unlikely to occur, until the Nodes change sign to Taurus/Scorpio on January 18. Those in authority look likely to continue to stand firm on repressive measures.

Final 2022 Draconic Bowl April 29 2022
The South Node is now firmly in the 8th House in Scorpio, the dispositors are Mars, unaspected, but peregrine in Pisces, and Pluto in Capricorn also peregrine, so both still weak. Venus the dispositor of the North Node in Taurus, in the 2nd House, is strong in Pisces the sign of her exaltation. She is backed up by a beautiful conjunction to both Jupiter and Neptune in their rulership of Pisces. This trio could really help the Nodal Axis evolve, through a productive sextile to Rahu and trine to Ketu. The 12th House placement of the stellium bodes well for assistance coming from the higher plane, with more emphasis on charity for those in need.
All the planets are Direct, this is a much more positive and balanced chart! Improvement and change for the better seems likely. Improvements to the area of life around finances and what the world values, seems more possible, with the strong position of the North Node in the 2nd House. However Saturn in his rulership, is now making the square to the Nodal Axis, so there will still be some rules or restrictions to our personal freedoms that we don’t like! 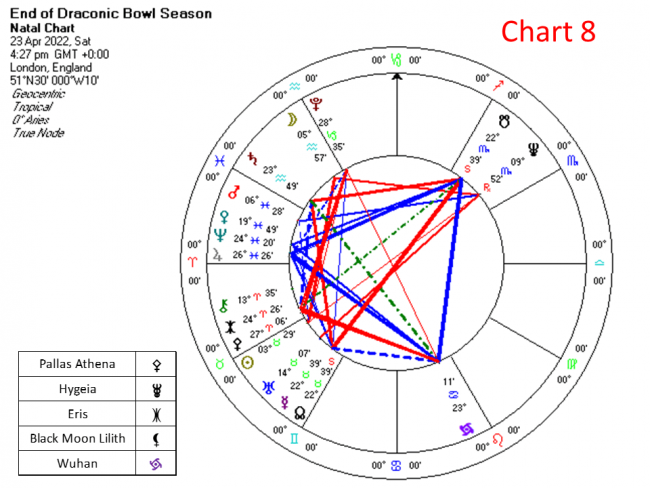 There are four minor planets which have been given significance by some astrologers in the charts of 2020 involving the conjunctions of Saturn-Pluto, Jupiter-Pluto and Jupiter-Saturn. I have included these in Chart 8.
Dwarf planet Eris, archetype of Strife and Disharmony, formed a tight square to Pluto, several times in 2020, due to retrograde cycles, and was linked to the virus by Steven Forrest. Asteroid Pallas Athena, archetype of Civilization and Wisdom, was in close conjunction to Jupiter and Pluto through all of their three mergers. Demetra George has written of her significance10 in addition to the existence of an asteroid called “Wuhan”, uncovered by Belinda Wilson and showing up appropriately, throughout the drama of the coronavirus, being named for the city where it originated. Asteroid Hygeia has to put her hand up to be involved, associated with health and remedies, as the archetype of Hygiene and Healthy Habits. Maurice Fernandez wrote about this in the June Careers Astrology OPA magazine. This could be extended to an association with the development of a cure or vaccination solution.
It can be seen that Wuhan, (as the virus), is positioned in that critical Cardinal 23rd degree, of Cancer, forming a Water Grand Trine to the Scorpio South Node and that beautiful conjunction of Venus, Jupiter and Neptune in Pisces. The dispositors to the South Node, in Mars and Pluto have both been strengthened. Pluto is now in a closer square to Pallas Athena than Eris, who he is separating away from. Hopefully bringing more wisdom and civilization to provide a solution and transformation, instead of global disaster. Mars forms a helpful trine to Hygeia, which could maybe suggest the development of a preventative cure or suitable vaccination program to action the transformation.
Hygeia qualifies as a planetary body in the same sign as the Node, but outside the bowl, (as considered in point 10 of Annan’s guide to delineating the Draconic Bowl). As such she can be considered part of the bowl structure and her condition could influence the outcome! The virus shows up as the only body not contained, the challenge to be overcome. It’s malevolence is indicated by the square to Eris, loose opposition to Pluto and quincunx to Saturn, who is regulating the adjustments to combat its influence. The resolution to Saturn’s square to the Nodal Axis, needs to be applied from the 8th House South Node and Hygeia. The South Node is also the resolution point for the Kite formed from the sextiles from Wuhan and Neptune.
So let’s hope that the 2020-2022 Draconic Bowl season is indeed the main driver for the current pandemic and restrictive situation that the world is experiencing, if it means we can at least expect a definite resolution, when the bowl concludes at the end of April 2022, not to recur for a considerable period of time.

It is not clear what this may amount to specifically for us here in Australia. I have noticed that the 60 asteroids I work with in my research are also tending to be affected as well. By January 1 only 18 of the 60 will remain in the opposite nodal hemisphere to the trapped planets. I wrote about this recently in the CIA Quarterly magazine. https://cosmicintelligenceagency.com/timelords-magazine-new-subscriber/

Venus will Station Retrograde on December 20 at 26 degrees and 29 minutes of Capricorn, retracing her steps to 11 degrees and 5 minutes of the sign on January 29. For those who like to work with the pre and post retrograde shadows of the more personal planets, Venus moved directly through this point she will return to, on November 18. Her Post Shadow Retrograde cycle will extend to March 1 2022. So altogether Venus will remain in Capricorn from November 5 to March 6, some four months, compared to more usual one monthly stints. Pre Retrograde Venus shadows, can give an indication of what is to follow. The way we want to spend our time energy and money is likely to change, maybe even who we hold most dear in our hearts. Venus is more cautious in Capricorn, prefers relationships to be predictable and committed. Desires tend to be more controlled, practical and are less likely to be expressed openly. Money and other resources are less likely to be wasted.

Venus is separating from a conjunction with Pluto, exact a week ago, on December 12. Obviously, during this time leading up to her Retrograde Station she is moving quite slowly so the pair will remain closely enmeshed within a one degree orb from December 10 to 19.

The Full Moon will have us feeling more restless than usual and indecisive than usual with the Moon and her North Nodes’ dispositor, Mercury, forming a square to Chiron, who will take has turn to Station Direct on the next day at 3.32 am. You may be able to see things differently as Chiron changes direction, making improvements to your self-belief and confidence. The Moon will also be moving to form a helpful trine to Jupiter, so in general there will be a positive feel coming from this.

The Sun will make his annual Solstice at zero degrees of Capricorn on December 22 at 2.59 am. Finally, Jupiter will end the year by transiting back into Pisces on December 29 at 3.09 pm. This will be a short stint in the sign he rules, traditionally ending on May 11 2022, after just over four months in the sign. It should bode well for taking positive vibes into your New Years affirmations on January 1.