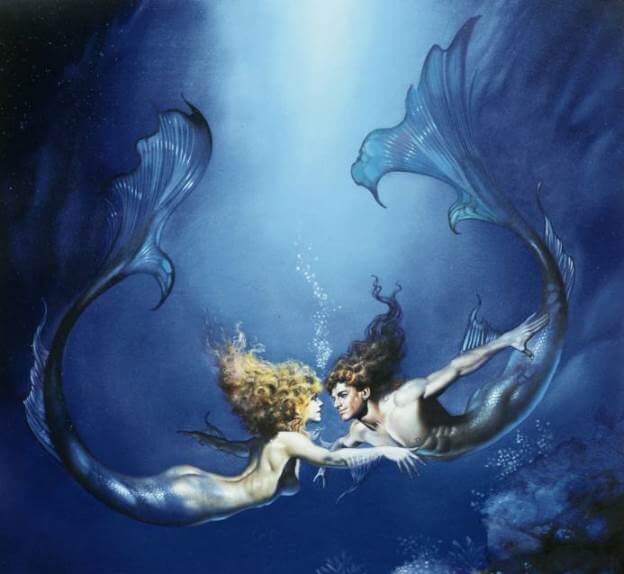 The Dreamy Pisces Full Moon will fall on 21 September, at 9.54 am (AEST) at 28 degrees and 13 minutes of the sign, with the Sabian Symbol for the Moon in the 29th degree of Pisces, “Light breaking into many colors as it passes through a prism”. The analytical power of the mind necessary for the formulation of life processes in their many aspects signifies differentiation, the relationship between the one and the many.

The symbol for the Sun in the 29th degree of Virgo is “A seeker after occult knowledge is reading an ancient scroll which illumines his mind”. After a crisis one should seek to realign the renewed consciousness with the primordial Revolution of the Truth of Men, root knowledge needed for rebirth!

There will be some interesting aspect patterns involved! The Sun in Virgo will be surrounded by somewhat dark energy in asteroids Nephthys, dark shadow of Isis; Nyx Goddess of the Night Darkness and Prosperina, Roman equivalent of Persephone, Pluto’s Dark Queen. The Moon will shine brightly opposite, separated from her dispositor, Neptune, by some six and a half degrees! 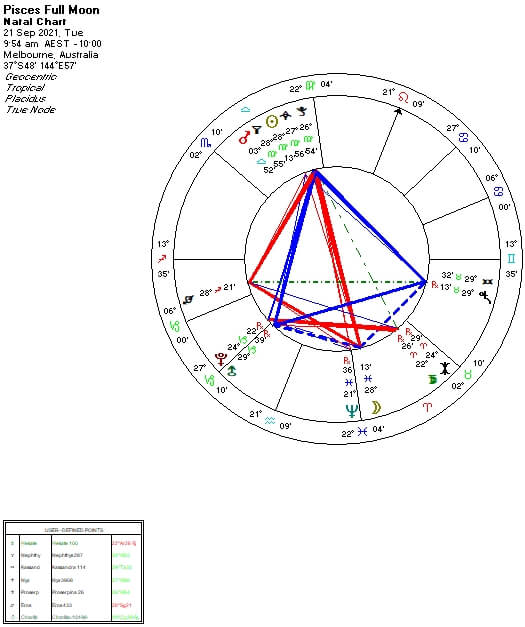 She will also forms the resolution point for the Earth Grand Trine from Pluto and Charliklo, (wife of Chiron she who can shape-shift for love) in Capricorn and the outcast Goddesses Sedna and Kassandra in Taurus. The Moon will gather further strength from a T-Square to the lunation, formed by asteroid Eros in Sagittarius, the life force of desire that drives every situation.

The Sun’s need to keep things to plan through Virgo looks like being overpowered by the more spiritual and natural energy driving Luna’s cause.

Pluto and Eris will be playing a back seat role here, being 4 degrees distant from the main players. Eris will also be moving away from the transformative support of Hekate. However, they will be continuing to dominate the outer landscape. Two days later when the Sun moves into Libra for the Spring Equinox on the Southern Hemisphere, he will be joining Mars in the sign making an easy opposition to the nodal Axis. The Moon will be in Aries and applying fairly closely to Eris, so discord will still be on the horizon from the feminine point of view!