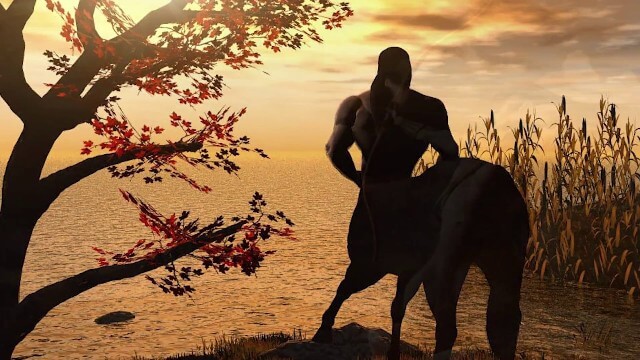 Chiron enters Aries at 6.09 pm today (AEST), after spending the last eight years in Pisces, the final sign of the Zodiac.  The world has yet to consciously experience his presence in the sign, as he was discovered on 1 November 1977 in Taurus, having left Aries following his last retrograde cycle there on March 27 1977.

Chiron enters Aries, ruled by Mars, surrounded by many symbols from the polarity with Venus ruled Libra.  He enters the sign immediately after the Aries New Moon, of course preceded and given clarity by the Libra Full Moon!

Venus, in her Earth rulership of Taurus, will oppose Jupiter in Scorpio, exact at 4.59 pm.  A few hours later she will perfect an easy flowing trine to Pluto in Capricorn at 11.03 pm.  The Moon in Taurus will merge energy with the asteroid Nyx, ancient Goddess of the Night and Darkness, between 6.30 pm and 10 pm.

Astronomers have designated Chiron as a centaur,  a body travelling in an extreme elipse between the orbits of Saturn and Uranus around the Sun.  He is closest to the Sun and Saturn whilst in the sign of Libra and closest to Uranus whilst in Aries, so likely to behave in the most unexpected, erratic and combative manner.

In mythology Chiron was born amongst the Titan Gods, his father was Saturn or Kronos.  Kronos who was married to Rhea, desired Philyra the daughter of his brother Okeanos.  Some say the pair shape shifted as he chased her and he impregnated her as a horse.  Other versions relate that Rhea caught the pair in the act and he turned himself into a horse to escape.

So Chiron was born as a centaur, with a horses lower body and a man’s chest and upper body,  Philyra was horrified and begged to be released from human form, as she did not wish to mother such an ugly offspring.  Kronos turned into a linden tree which has the same name in Greek.

So Chiron was abandoned by his parents and brought up by Apollo the God of Creativity and Healing.  He later became a teacher and mentor to many of the demi-gods and heroes, including Achilles, Jason, Hercules and Apollo’s son Asclepius, who went on to become known as the God of medicine.  He was later accidentally wounded in the thigh by one of Heracles poisoned arrows and being immortal couldn’t die even though in agony.  His half-brother Zeus or Jupiter took pity on him so he became the starry constellation of Centaurus and the archetype of the Wounded Healer was complete.

At the time of his discovery Chiron, at 3 degrees of Taurus, forms an out of sign Grand Trine with his body or appearance, in his Sagittarian (centaur like) body, and his father/foster-father in Apollo and Saturn!  He was sandwiched between the asteroids Kassandra and Mnemosyne, both of whom have connections to Apollo in myth.  Mnemosyne was mother to the Nine Muses, who were directed by the God of Creativity in inspiring the writers, poets and artists to preserve the stories of the deeds of the Gods and heroes.  Kassandra was gifted with prophecy by Apollo, but then cursed by him so no one would believe her predictions when she rejected his advances.

As Chiron enters Aries he is at his closest to the orbit of Uranus, so likely to behave in the most unexpected ways, causing disruptions and upsetting current beliefs around healing.  Uranus can be seen to be in close conjunction to the asteroid Apollo and his ruler the Sun!  Uranus is also still in last degrees of Aries.  Chiron is conjunct Mercury, who is stationed Direct so very powerful and Chiron makes a trine to Mnemosyne in Leo at the top of the chart.  So important messages will be coming through about how we can all shine more brightly.

Venus makes a Mystical Rectangle to Jupiter, Pluto and the MC of the chart, linking together her transits today to both the God of the Heavens in Zeus and the God of the underworld in Hades.  We have powerful potential with this ingress of Chiron in Aries to better integrate the way we express ourselves creatively about what we love, value and see as beautiful, with the wounds we need to heal from our unconscious and the courage to take action on being the best we can be.