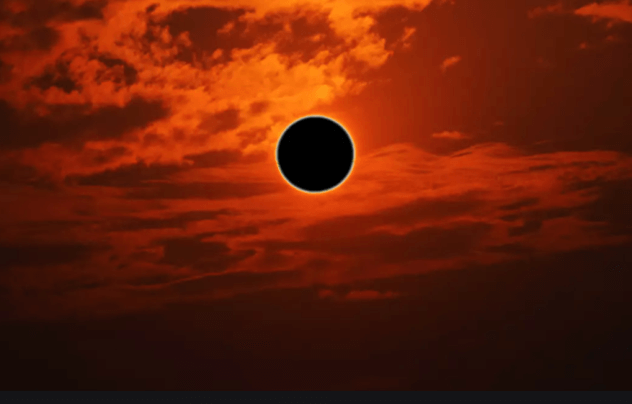 The Cancer New Moon/Annular Solar Eclipse will be at 4.41 pm on Sunday June 21 and will hardly be visible in Australia. But it will be visible as a characteristic “Ring of Fire” in a path over some of Africa and the Middle East, South/East Europe, much of Asia and the Pacific/Indian Oceans. 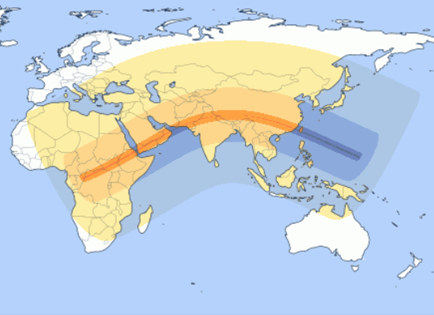 At 0 degrees and 21 minutes of Cancer, its 1st degree the Sabian Symbol is “On a ship the sailors lower an old flag and raise a new one.” A radical change of allegiance exteriorized in a symbolic act: a point of no return, a critical part of the process of reorientation.

This eclipse is the third of a series, occurring at 0 degrees of Cancer connected to the Saturn Pluto cycle which culminated in 2020! This particular cycle began in 1982 with their previous conjunction, some 37 years ago at the same June Solstice, twice the 18 and a half nodal cycle which determines when eclipses occur eclipses!

The midpoint occurred in 2001 when Saturn opposed Pluto and the world we lived in transformed faster than the Twin Towers feel down! This attack took just three months after the Total Solar Eclipse at the June Solstice of 2001, which at 0 degrees of Cancer was situated almost exactly an opposition, 180 degrees from the beginning of this process with the Saturn Pluto conjunction in 1982.

Gemini Brett has stated that “the Total Solar Eclipse of 2001 was the most powerful astrological event of our age!” This Annular Solar Eclipse on June 21 2020 will be part of the last eclipse seasons to align with the North Node in Cancer and South Node in Capricorn until 2028 and 2037. The 2020 series began at the North Pole on May 25 1389.

If you have planets or points in your chart between 0 and 2 degrees of the Cardinal signs of Cancer, Capricorn, Aries or Libra, you are likely to feel its effects more strongly. 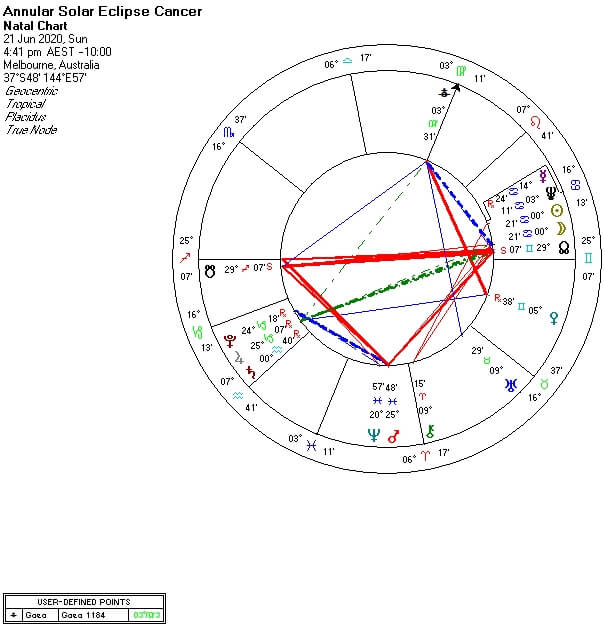 As well as being just over a degree from the North Node, in the last degree of Gemini, the Sun and Moon will be conjunct the asteroid Hygeia and forming a productive sextile to the asteroid Gaea, Mother Earth. You can see from the chart that they form a a Yod or” Finger of God” pattern to Saturn through a pair of quincunx aspects. Hygeia presents healing energy and Saturn at the focal point of the pattern is most likely where an adjustment needs to occur, to the rules of the land in a manner which is healing to our land.

Any lunation involving Cancer tends to be more emotional and we all feel them more strongly, as the Moon is most comfortable and able to act according to her true nature in the sign of her rulership. Cancer is initiating water, the glyph of Cancer can represent the duality of the child and the Madonna, but the child can’t run the show yet, you need to take this powerful opportunity to clean out your old conditioning to balance not suppress and mature into the powerful and wise crone energy able to calmly and serenely help each other and the world to deal with life and death situations. Becoming a mother is the biggest identity change you can go through and we are currently birthing a new age despite the huge resistance to change we see politically in the world with more rules and boundaries being bought in as the old order fights to survive.

With the Sun and Moon in the sign of Cancer, the more general energetic focus is on:

• Ensuring stability and safety for yourself and those you love
• Your family unit and your home environment
• Sentiment and nostalgia, remembering the past
• Avoiding conflict and change, trying to move away from challenging situations
• Worrying about the well-being of those you love
• Responding emotionally and instinctively to situations
• Looking after your mother or mothering in general
• Being sensitive to the feelings of those around you