All Saints Day with Mercury Retrograde in Scorpio 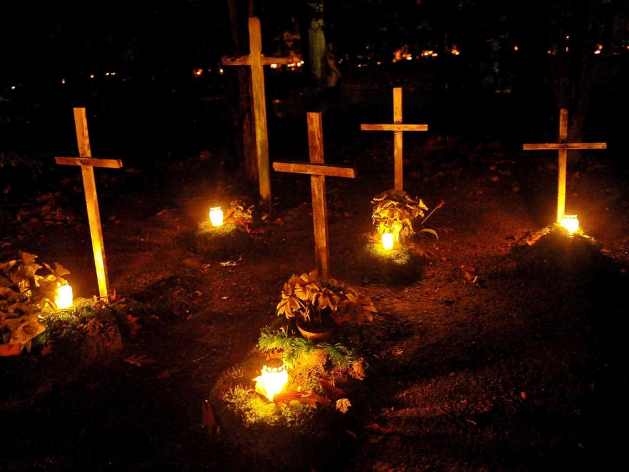 Halloween is the evening before All Saints Day on November 1,  Mercury will Station Retrograde in Scorpio at just 2.42 am (AEDT)!  All Saints Day was when the dead ascending to Heaven was celebrated in ancient religions, followed by All Souls Day on November 2, when their souls were prayed for.  Halloween is seen as the time when the veils between the worlds are thinnest and the dead can be contacted more easily.

Every year this period falls in Scorpio which resonates perfectly with the transformative energy of the sign.  However this year with Mercury and Venus joining the Sun in Scorpio and Mercury in Scorpio, stationary at the transition point, it seems even more poignant than usual. This is a signal that you need to dive even deeper into your unconscious than before, unturning stones that you haven’t wanted to look beneath, in the past.

Of course Mercury has been slowing down for quite a while, having merged energy with Venus just the day previously. So you will be fully immersed and enmeshed ready to retracing your steps in regard to your relationship life and discovering what you need emotionally and intellectually at a very deep level with Scorpio.

Venus will be completing a symbiotic connection with Mars, her partner-in-crime when it comes to relationships! For a few weeks the pair have been positioned in signs that each other rules. So they have been able to understand each other’s position more easily, and it has been possible to obtain some necessary compromises! This will enable the deep dive that Mercury will now be asking for and it will be possible to see deep truths about yourself, where you have not been prepared to go before.

Having done her work in negotiating this situation, Venus will be ready to move on into Sagittarius on November 2. Retrograding from the 28th degree of Scorpio, Mercury will remain with the sign for the entirety of the cycle from October 12″ to December 9, including both his “pre” and “post” shadow periods.

He entered the sign just as the modern ruler Pluto was stationing direct from his own retrograde cycle. Mars the modern ruler of the sign will enter Scorpio on November 19, some 35 hours before Mercury stations direct once more. So this retrograde cycle through Scorpio has several additional factors that Mercury doesn’t usually encounter in the sign. Pluto will also be approaching his conjunction to Saturn on January 13 2020, so in the final throes of a much longer and more powerful pattern.

Mercury will be tightly conjunct and applying to Pallas Athena at the time of his retrograde station, so keen to apply wisdom and strategy to whatever he unearths within you. He will be making an opposition to dwarf planet Sedna, and forming a T –Square with the asteroid Gaea, or Mother Earth in Leo.

From Innuit mythology Sedna made a bad choice in who she married, and in getting her father to try and rescue her. As a result she had her fingers chopped off and sunk to the bottom of the ocean, giving birth to the sea mammals from her finger stumps. The way we are looking after our beautiful planet is causing a lot of angst at the moment and there certainly are a lot of bad choices being made in the collective.

Perhaps the inclusion of Athena through this aspect pattern can throw some wisdom and light onto the situation and reveal some better solutions! Where have you made bad choices over the last few months and what is there to learn from reviewing your circumstances and understanding of the situation.

The asteroids will make their contribution to the Halloween period as well!  Orpheus and Flora will be merging energy with the Moon in Sagittarius from 9.30 am on October 31 (AEDT).  Orpheus tried unsuccessfully to recover his dead wife from the Underworld!  Then from 8 pm until 5 am on November 1, The Moon will be connecting with Kassandra, Eros, Jupiter and Ceres, whilst Mercury is standing still ready to begin his backward journey.  There is a lot of prophecy, deep desire , extremity and loss involved in those archetypes and both Jupiter and Ceres seem to have a role to play in many death charts that astrologers come across.